Millions of years ago, the planet was ruled by giant reptiles. It’s no wonder many would want to take a trip back in time and capture every jaw-dropping experience of seeing those majestic creatures. Nowadays, it has been reported that the most prominent reptile ever to live is the crocodile, together with its cousins, caimans, gavials, and alligators.

But have you been curious what the largest crocodiles ever were? Albeit,  many of you would surely have different speculations. To give you a light bulb moment, we’ve prepared the list of the top 5 most giant crocodiles in the world. So, get yourself ready for these amazing discoveries.

Saltwater crocodiles or Crocodylus porosus is one of the largest on the list of all the living crocodiles. Its title as being the “largest” is not only limited to this word; it is also dubbed as the largest reptilian globally. With their most extensive sizes and dangerous nature, it’s not a surprise that it is the most threatening and dangerous animal, especially to humans.

According to a published story, the most massive crocodile ever witnessed was shot in 1958 in July near Normanton, Queensland, Australia. People chose the name Krys as a credit to someone who killed it.

During this moment, people were amazed yet threatened by its large size of 28 foot 4 inches (8.64 meters). But some said that the actual size of Krys is highly mysterious. Everyone who witnessed the crocodile would say that it is much larger than the reported measurements. Krys is no longer alive today, but its replica, placed at Normanton, Queensland, Australia, will always be living the proof that he was discovered and acknowledged in the present generation and the years ahead. Indeed, this crocodile, with its enormous size, deserves a lot of acknowledgment.

On September 13, 2011, in the Bunawan creek in the province of Agusan del Sur in the Philippines, the residents discovered a giant crocodile, which for them would be too impossible for the Guinness Book of Record to simply ignore. The saltwater crocodile was named Lolong, and based on the measurement, it is 20 ft 3 in and weighs about 2,370 lbs. Given this, it’s no wonder that Lolong was regarded as one of the enormous crocodiles ever recorded and captured so far. Dr. Adam Britton, an Australian crocodile expert, measured and sedated Lolong in 2011 November. He confirmed, at first hand, that this crocodile is indeed one of the longest crocodiles ever caught. However, Lolong was reported dead at 8 pm on February 10, 2013. The cause of his death was due to congestive heart failure compounded by fungal pneumonia, kidney failure, and liver lipidosis.

3rd on our list of largest crocodiles in the world is Dominator.

Dominator was discovered at the Adelaide River, Australia. The Boss Croc on his stretch, has put his name on the rise as one of the biggest jumping saltie humans have seen. Like many would say, Dominator sure lives up to his name and is indeed impressive. 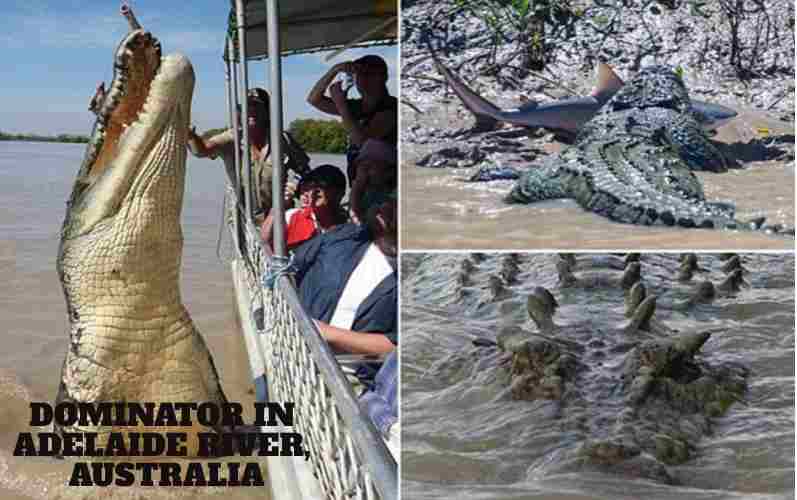 The marine water giant did not have an exact measurement yet. However, it was estimated that it has 20 feet and a ton of weight. Dominator was discovered by the people at Adelaide River Cruises when it was captured leaping out of the water. Fortunately, this impressive jumping saltie is still alive today. Indeed, one can say that Dominator, apart from his danger-like features, is at some point entertaining people with his exciting talent on the show.

There is nothing more terrifying than witnessing a man-eater crocodile named Gustave. This giant male Nile crocodile was discovered at the place of Burundi, East Africa.

Did you think this only happens in movies? Well, you thought wrong. It has been said that Gustave killed a lot of humans for approximately 300 people. They are usually seen at the banks of the Ruzizi River and the northern coasts of Lake Tanganyika. Indeed, it’s the most horror-stricken creature that ever existed. This man-eater beast, however, has not been captured. So, his precise measurements are not yet validated. However, most people assumed that it measures about 20 feet and a ton of weight. Since this enormous crocodile hasn’t been captured yet, the danger is still serious for the residents who live near the area. This being said, it is much suggested that people, especially those living nearby, should be vigilant by all means.

Last in our list of the largest crocodiles in the world is Bujang Senang. Knowing the story behind the discovery of Bujang Senang can undoubtedly strike terror for many. Like any other dangerous crocodile, this one is also one of the scariest ones because it eats humans.

Some people said that he has been around and killing for thirty years of his existence. Bujang Senang was initially estimated at 25 feet (7.62 meters). With this great length, one can’t help but assume that it was responsible for the death of 13 victims in 1991.

However, people don’t have to worry any longer about Bujang Senang terrorizing the town as this beast had already died on May 20, 1992. After he got killed, the recorded measurements were mistaken. Bujang Senang was 19 feet 3 inches, and it weighs over a ton.

In the end, no matter how long or short this crocodile might have been, given his wild beast features, people should not be too confident at all costs. Crocs have been featured as antagonists in many terrifying movies. What’s terrifying is knowing that there really was a time in the past where these crocs roamed, terrorized, and harmed humans.

But you want to know what’s more terrifying than that? It is the fact that nobody is ever really sure that a killer croc isn’t alive and just hiding right now somewhere in lakes and swamps, waiting for its next victim.